An intercultural approach to conflict transformation through art

This warm July started for us hosting Peace Rhapsody, a youth exchange funded by Erasmus+ during the Festa Major of Terrassa.

A total of 33 youngsters from all over Europe, Georgia, Ukraine, the United Kingdom and throughout Spain, shared knowledge and ideas, living together for 8 days in the local high school Investigador Blanxart.

The exchange focused on exploring different artistic tools for the peaceful resolution of conflicts. The concepts of individual and collective identity, stereotypes and prejudices, the pyramid of discrimination, different attitudes towards conflicts, non-violent resolution methodologies and peace were reflected and discussed in an intercultural context.

As in all youth exchanges, different non-formal education methodologies were used to work on the concepts already mentioned. In this case, artistic tools such as theater forum, music, body expression and the technique of audiovisual production of stop-motion were applied.

The artistic sphere of the exchange was supported by local artists from the art collective Majara and Magneti Studio, who contributed with their experience in urban art and guided the participants with designing and performing a colorful collaborative mural. This mural was the result of a week of an intense creative process, and an intense process of multiple learnings and self-knowledge. 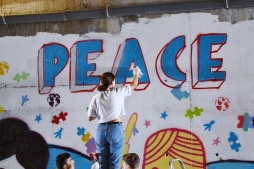 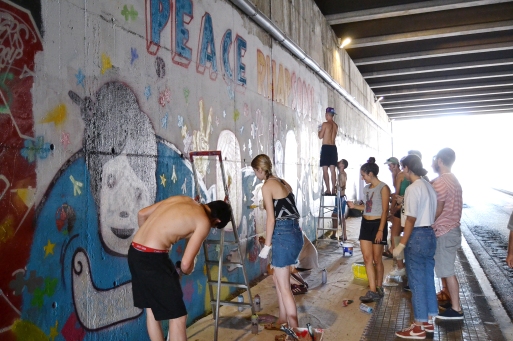 Taking advantage of the fact that the Festa Major (local festival) of Terrassa was taking place, the youngsters had the opportunity to enjoy the culture of the city: a parade with folkloric beasts, giants and big heads, the exhibition of “castellers” (human towers), the traditional dances of “bastoners”, the “correfoc” (literally translated as fire-runs) and the fireworks show. Moreover, the participants got to enjoy the long and diverse musical program all along the evenings of Festa Major. The vast majority of them were amused with the performance of the different teams of human towers and, later, they used the idea of ​​making human towers as a creative solution to conflicts and as an exemplary idea of ​​cooperation and collaboration. 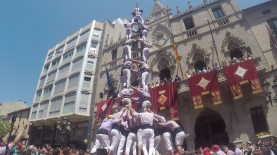 Towards the end of the exchange, the youth counselor received us at the city council of Terrassa and pointed that the city will always welcome youth initiative from all around We were also invited to the program El Submarí in the local Radio and a representative from each country had the opportunity to share their experience.

Thank you, participants, for this week full of creativity, motivation, enthusiasm, questions, debates, reflections and emotions that we will never forget! See you soon 🙂

You can download the postcards of the project in the following links: